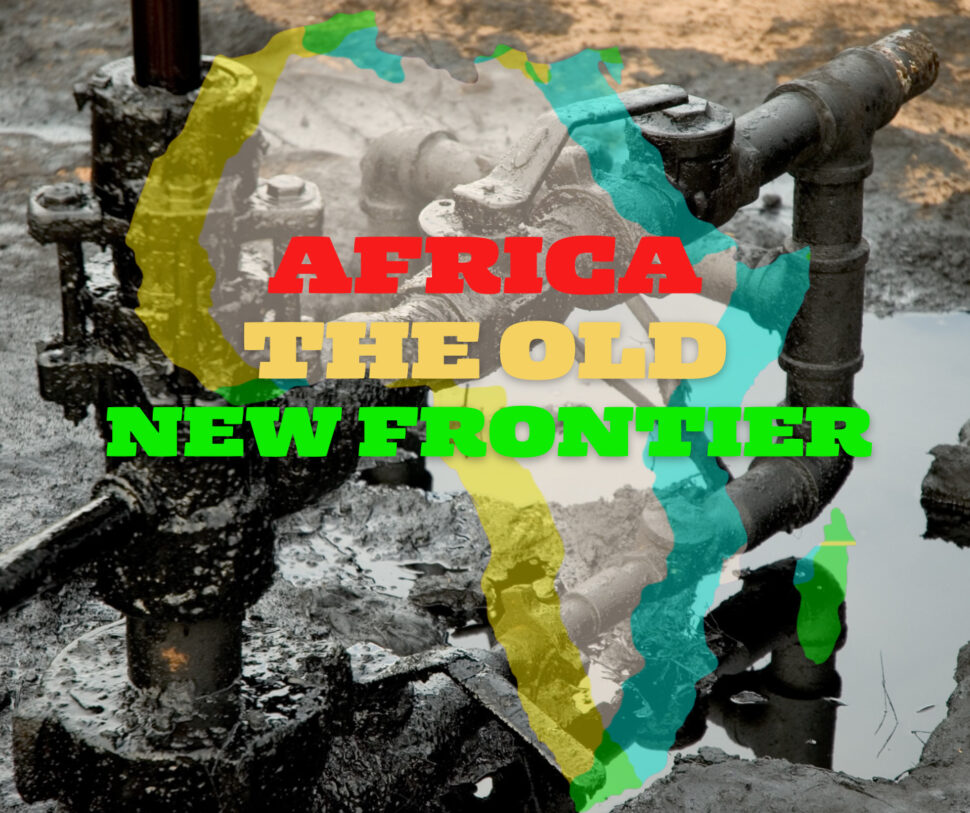 With the Industrial Revolution, fossil fuels became very important as the primary source of energy, marking the start of the so-called modern era, and it was very central to the development of the countries in the Global North.

As important as they were, we now know that fossil fuels have brought huge negative impacts to the planet, destroying the environment, raising health problems, wars and militarisation in countries with oil resources, they have led to massive human rights abuses and assassinations. It has culminated in the current terrible climate crisis.

As the demand for energy continued to increase and the link to the climate crisis became unassailable, world leaders should have started moving to other sources of energy, renewable, clean and with less impact on the planet. But instead, companies and governments continued to look for fossil fuels in other places and other regions, to maintain the capitalist system and to uphold the standard of living of the few global elites.

Africa has once again become a new frontier. With many deposits of unexplored coal, oil and gas, weak democracies, and many corrupt leaders, the continent is an ideal and easy prey. For reasons not understood by those who understand the climate crisis, the false narratives of development and better life through fossil fuels fell easy on the ears of African elites, either through ignorance, greed or both. African leaders are giving speeches claiming that they have the right to explore, and since others have done so in the past, now it’s their turn. Now is Africa’s turn to again fall into an abyss.

We have overwhelming examples in Africa that oil exploration did not bring the development that the leaders’ speeches’ promise. Just look to Nigeria. The Niger Delta basin, where much of the oil exploration takes place, is a region where communities are living in a destroyed environment, with gross human rights violations, assassinations, insurgencies, rampant killings, rapes and hijackings of community members.

As for development, Nigeria stopped thinking of any other solution and made their economy mostly dependent on oil, and oil did not bring any of the promises of development the Global North companies and governments had said it would. Another country that depends almost entirely on oil is Libya, and what is today’s situation in the country? A failed state, where even the basest structures for societal organisation have collapsed due to conflict and resource grabbing, in particular oil and gas grabbing. With slightly different scenarios, but nonetheless grave situations, we also have Angola, Congo and Sudan.

Mozambique is one of the newest frontiers. It is often said by the people in Mozambique that Mozambicans are different, and in many ways we are. Our cultural heritage, our traditions, our look on life, our easygoing way of life might save us troubles, but clearly leaderships are ignoring the lessons from the past. They forget the old saying “Insanity is doing the same thing over and over again and expecting different results”.

Mozambique became independent in 1975, one of the latest countries to gain independence in all of Africa. After independence, it went through many phases: exodus of most of the colonial structures and people; communist / socialist system; putting in place new structures and new system; 16 years of civil war; and in 1994 the first election in what supposed to be a democracy. But this new democracy was nothing more that the complete opening of the doors to free markets and to all types of foreign investments in the name of development. This “investment” started to come in through different forms, such as massive aluminum smelters, large scale monoculture plantations of exotic trees, massive introduction of cash and export crops, and many others. A “mining” economy was introduced, where everything was taken out of the country.

Later, Mozambique’s elites and the international fossil fuel companies decided to follow the path of exploring fossil fuels in the name of development, claiming their “right to do so”. All the while, Mozambique is currently one of the countries most affected by climate change, with growingly intense hurricanes and storms, that have already devastated cities such as Beira and Pemba, and expanding drought areas. This is the context in which the government is looking to boost the industry that contributes most to this crisis, in the midst of a global movement calling to end the exploitation of fossil fuels.

Yet, there is a previous story. First it was coal, open pit coal mining, and at the time many advocated that it was the solution for the country, with very few organisations opposing it. Those that raised their voices were put apart for being different, the outliers, they were labelled “anti-development”, against the government, and not patriotic. As in many African countries where fossil fuel production started, civil society members that opposed it have encountered not only segregation but also many dangerous threats.

As some expected, in the province of Tete, eleven years after coal production started communities are still waiting for the fulfillment of agreements: relocation contracts have not been kept, land promised in exchange for the lost land was not given, livelihoods were destroyed, land and territories were grabbed, water resources have dried, the territory has been fenced up or so polluted that it is a health risk to use. Having no other options, communities are using it, with health problems having increased, with violence and expulsions having become a norm. Those that talk or raise their voice receive threats that have escalated to much worse. Some of the companies involved in coal in Mozambique are Vale (Brazil) and Jindal (India), among others.

Not stopping here, society again fell into the trick that this time it would be different, since “Mozambicans are different”. And so the path to gas exploration started.

From the beginning, the path of complete destruction of communities’ structures, livelihoods, territories, land grabbing at a large scale and environmental destruction began in a area that is a UNESCO Biosphere Reserve: the “Quirimbas”, in Cabo Delgado province.

The multinational oil companies came in: Anadarko, Total, Eni, ExxonMobil, Galp, Mitsui. The rush to start the project without conditions to relocate the communities meant that houses and lands were not ready and people were just shoved away. The land that as per agreement was promised to the peasant communities was not available, and many of these peasants were women, with a growingly hard task to provide without land, to carry on planting and growing their food for the community. The artisanal fishermen were also not given access to the sea, preventing them to carry on with their fishing livelihoods, and further depriving communities of basic subsistence conditions. Fossil capitalism, well before the production phase, is already a massive destroyer of life.

Where once there was a relatively peaceful community, living from the natural resources so rich in this province: plants, soil, land, the sea, with some added income from tourism, in an area of conservation and amazing beauty, a war started in 2017.

Today most of the area is destroyed and communities. that were already dislocated, had to run away from the conflict in droves. All of this happened, all these major changes occurred, because of and when the beginning of gas production came near.

Today, Cabo Delgado is an area with war and insurgency. More than 800,000 people have been displaced and have fled their homes since the beginning of the conflict. Over 3,000 people have died, human rights abuses are increasing, disappearances and kidnappings of communities are still on the rise, rapes of peasant women by the military are also unfortunately increasing. Many reports done by international organizations, many requests to the government for clarification and investigation are denied, but nothing is done, with the situation worsening by the day.

The impacts of this project to the climate crisis are massive, as the projected reserves are very substancial. We cannot afford any fossil fuel projects, we cannot increase emissions in Mozambique or anywhere else, we need to stop exploring and phase out the existing infrastructures.

By allowing the exploration of natural gas, Mozambique’s elites are following the same path of African countries such as Nigeria and Libya. In all the examples we have on the continent, these projects have led to an increase in conflict and militarization, terrorism, corruption, national debt, poverty and a general deterioration in the standard of living of local populations, without having generated benefits for the country and the peoples.

This has nothing to do with rights to explore, to develop, or respecting African countries’ sovereignty. It is a suicidal attempt to force Africa to invest in the same systems that have created the biggest crisis in human history. It is the tried and proven model of fossil fuels that line the pockets of elites and leave the people in a worse off situation, while increasing global emissions.

Emmanuel Macron, the recently reelected French president has stated that Mozambique needs to explore gas, that Mozambique does not have the right to not allow it, that it needs it to develop. It is clear he is assuming his role as Total Energies’ spokesperson. Total needs to keep on making outrageous profit, to explore more fossil fuels, at the cost of the Mozambican and other peoples, their livelihoods, their rights and the survival of future generations.

Capitalism is also in a historical crisis. Its rate of accumulation is not growing at the speed and rate they need, and the overwhelming environmental, health, social and political crises are compounding to affect it. It will do what it is hardwired to do: search for new frontiers of exploitation in places where it still can and look for other ways to intensify extraction and production, be it material or virtual. It will be doing it in a growingly adverse context, as the promise of future profits seems to be ever more tenuous. This doesn’t mean it will not go forward with the most outrageous projects it can think of. Although any promise of profit will make it advance, even in the Global North, it will be focusing its claws on the Global South, looking to destroy and loot what’s left after 500 years of colonialism.

Anabela Lemos has been an environmental justice activist in Mozambique since 1998. In 2004 she started JA! Justiça Ambiental and has been the Board Director since then. She seats on the Executive Board of Friends of the Earth International. In 2022 she received the Per Anger Prize, the first environmental activist to receive the prize.

What is ecofeminism, and why is it necessary in the fight for climate justice? 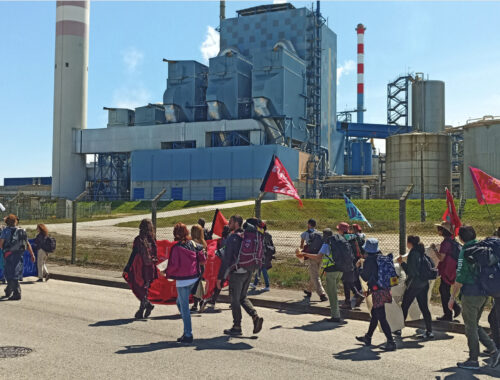 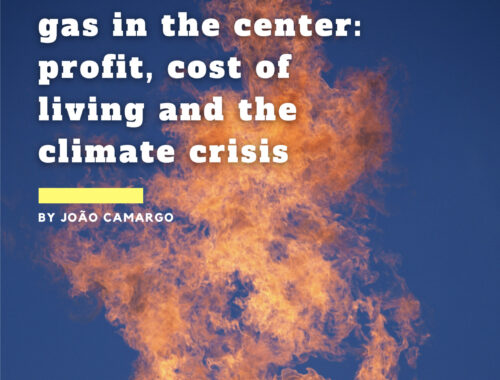 Gas in the center: profit, cost of living and climate crisis